Bar Citrus is one of those places we had to give some extra consideration to, when compiling our list of places to visit for this series. It’s a Charles Wells outlet, and it calls itself a Bar of course, but it has the feel and opening hours of a café. It made the cut, of course; and whereas some places we might choose to visit of an afternoon instead of the evening on the basis that the evenings would get too busy, with Bar Citrus, that’s not a problem: four days a week, it closes at 7 or 8pm.

So here we are on a Sunday afternoon, in the pedestrianised part of Harpur Street, venturing in. RealAleRocks has been here before, but I haven’t – and as far as the feel of the place goes, the presentation, the atmosphere, I’m pleasantly surprised.

Outside on the street, there are a few café tables and chairs, under a canopy. Inside, with a single exception, it’s all leather seating (presumably a vegetarian’s nightmare) – in the front, leather sofas, leather pouffes, easy leather chairs, and even a small leather bench rather curiously inset into the bar. Further back, past the bar on the left, a row of tables with rather more upright leather chairs, then opening out to a lovely area beneath a skylight, with more tables and chairs, and a solitary taller table with high stools. Leather, of course. The single exception I mentioned, by the way, is a bright red five-pointed chair which looks variously like a flower, or a starfish. I’m guessing it’s meant for children. Well I didn’t find it terribly comfortable anyway. 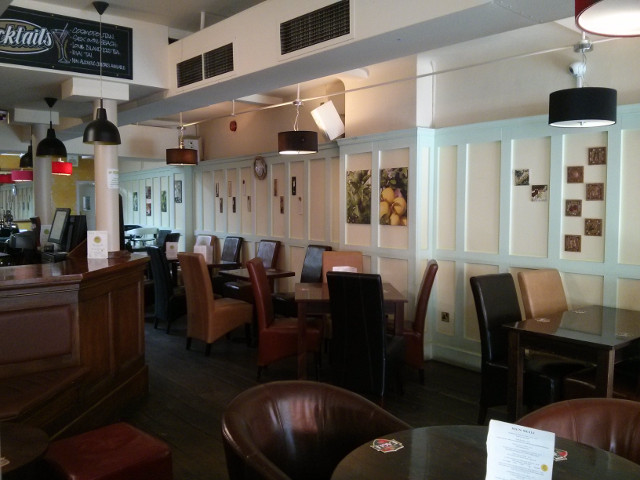 The selection at the bar is disappointing: not exactly the “extensive range of bottled, draught beers, real ales” that the brewery’s web site claims. I mean, it’s not a good sign when even the Stella tap says “coming soon”, is it? Alternative taps included Guinness, Strongbow, Fosters, and Eagle smooth; not really fancying any of those, I try my luck with a Magners cider from the fridge, while RealAleRocks plumps for the Eagle smooth. Possibly not the most rewarding £7.70 we’ve ever spent, but we’ll see. On all the tables, there are Eagle IPA beer mats – which is a shame, as Eagle IPA would have been an improvement over what’s actually on offer.

The wooden flooring, and the bar, and the tables, and most of the chairs, are a fairly uniformly dark colour; thankfully the walls and ceiling and even the speakers have been painted a much lighter mix of cream and white, and there’s plenty of daylight throughout, with that skylight at the rear, and large windows in the front. Around the walls are paintings of lemons and grapes and so forth. Some of the tables have a “tapas menu”.

There’s a small TV in the back, just near that perching table; and a larger TV in the front, above one of the sofas. Both are turned off today. Instead, music plays quietly: we pick out Fratellis, T’Pau, Embrace. Next to the front door, there’s a small basket containing a copy of the Daily Mail, and something else newspaper-y, but I don’t notice what title. The lobby area has a large noticeboard, covered with adverts for local events. There’s also an “Upcoming events” chalkboard, which simply reads: “Saturday”. Technically true, perhaps, but not terribly informative. 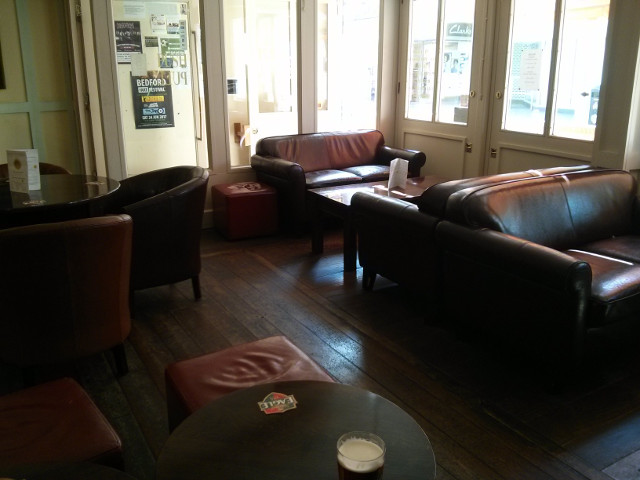 Written on the glass in a window next to the front door, are the words: “A dress code applies on the premises and the management reserves the right of admission”. There’s no clue though as to what this dress code actually is, and while we’re there, we see people arriving with jeans, hoodies, baseball caps – even a child in a PE kit – all apparently OK. In fact there’s been a fair mix of people here: a couple of women in their 60s sitting in the skylight area; a man in his 30s with a small girl sit at a table outside. A man and a woman in their 60s, with lattes. Ah, now a woman in her 20s joins the man and the girl. A man in his 40s sits at the bar. A pair of women in their 50s and 70s perhaps arrive, but then leave when they find out that food service has ended.

RealAleRocks has been struggling with her pint of Eagle smooth: it started off (perhaps unsurprisingly) cold and tasteless. After a while, it has warmed up a little, which brings out some taste. Alas, specifically what it reveals is that this pint is off, distinctly past its best. Eagle smooth was never exactly going to be one of the world’s finest pints, nor indeed the town’s, but this specific pint is worse than it should be. She takes it back, and gets her money back; we share my “cider”. Well I say “cider”, but I’m unconvinced as to the involvement of apples in its creation. But it’s cold, carbonated, and sugary, so … it passes the time. Until it doesn’t, and we ditch what remains and move on.

The 27th place we’ve visited in this series, and the first time either of us have bailed on our drinks – and we both bailed.

To be fair, I could visit Bar Citrus again, but only on condition that I had either soft drinks, or perhaps some wine. The seating’s quite nice, I guess? Let’s just hope I don’t turn vegetarian.

I’m no pub historian. I do know that this place used to be called The New Inn, but neither RealAleRocks nor I never went in there, so this is our first visit. Before starting out on this venture, while assembling the list of pubs and working out what our criteria would be, this place came up, and warranted some discussion. As with all the places that we’d never been to, we were making assumptions, that is to say guessing, about what we thought this place might be, in order to decide whether or not to include it on the list. “The Tavistock: Pub & Carvery”, says the sign on the outside (which we checked using Google Streetview, from the comfort of our own home). Well, it said “pub”, so … well I guess we just took them at their word.

It’s early evening on a weekday as we arrive. Inside, it definitely looks more like a restaurant than a pub. Sure, there’s a bar on the right, but restaurants tend to have bars. On the bar we have a selection of drinks that I won’t waste my time reciting, and you don’t have to waste your time reading. I’m amused by the fact that this place has just two handles: CW Eagle IPA (with the two-tone blue badge); or CW Eagle IPA (with the older red-and-green badge). Nice to have a choice, eh?

RealAleRocks selects the Eagle IPA (!), and I have a pint of Stowford Press. When we ask for the beer to be topped up (as it badly needs it), the staff’s attitude becomes noticeably less friendly, but it’s topped up anyway. We’re charged £6.80 for our troubles, and we choose a table and sit.

The place is laid out as a square. It’s just a single, large, square space, with a bar on one side, the food along another, and tables everywhere else. A TV is on, quietly, above the bar. There’s wooden flooring, filament bulbs, and a perfectly unremarkable green-and-cream colour scheme. In the far corner are a couple of chocolate-coloured leather sofas. In contrast to the rest of the restaurant, it’s very gloomy over there – we’re not really sure what that corner is for.

There are families here, couples, a few men on their own – but everyone except us is eating; the staff seem to be tolerating us “just drinking”, but it’s hard to escape the impression that this doesn’t happen often. RealAleRocks and I watch the goings-on, including watching the staff struggle to pull another pair of pints. One comes out very low, again; the other pint ends up with a high, odd-shaped head. We speculate that pouring pints isn’t their strong suit.

My cider isn’t going down well either; I abandon it half way through. I’ve broken one of the fundamental rules of this series – stay and have a pint – but that’s OK, because this isn’t actually a pub.