The White Horse has long been on my list of pubs that I’d quite like to go to at some point, though I’m not sure I can put my finger on why. It’s far enough out of town that the pubs are becoming sparse, so it stands out. It’s harmless enough to look at I suppose, with its white exterior and predictably styled Charles Wells branding (that typeface, those colours). In front of the pub, there’s a large gravelled area with a few picnic benches; a couple sit here, with a dog. Round the side of the building, there’s even more gravel. Well it keeps the weeds down I suppose.

Inside, it’s lighter and airier than I expected. The bar is straight ahead, and it extends round to the right, into a separate room. To the left, there are sofas, tables and chairs. At the bar, it’s almost, but not quite, the usual Charles Wells selection: on the handles, CW Eagle IPA, CW Bombardier Colonel’s Reserve (a new one on us), and one empty handle. On the taps: (CW) Estrella Damm, CW Dry Hopped lager, Young’s London Stout, and a selection of other lagers and ciders. We both have the Colonel’s Reserve; £7.40 for the pair. Time to take a seat, and watch the world.

At the bar – which only now, as I write this some days later, do I realise was free of bar stools – there’s neat wooden flooring; opposite the bar, a selection of leather sofas, chairs and pouffes. It’s late on a quiet weekday afternoon, and quiet in here; once we have our beers, the young man who served us goes to sit back down on one of the sofas. Beyond the sofas, there’s a shelving unit, with an assortment of vases on display, and a few newspapers, some in a rack on the side, some in a small neat stack. The papers are all the local ones: Bedfordshire On Sunday, Times & Citizen, and even the rarely-seen Bedfordshire Clanger.

Beyond this, the tables-and-chairs seating area occupies the left-hand side of the building. The carpet here is looking a bit tired, and the walls are painted the most appalling mustard-ish colour (RealAleRocks calls it an “upset stomach colour”); but if you can overlook those, then everything else is pleasant enough. The furniture is fresh and light, and each table has the wine list, and a small posey of flowers in a vase. Well, some are in vases; some are in jars. And one of posies is in a Kronenbourg-branded half-pint glass. But it’s the thought that counts, right?

Next to one of the tables, between the windows, is a fireplace, containing a wood burner that looks more decorative than functional. Opposite, a bookshelf; mostly fiction, but unusually, a selection of computer books on the bottom shelf.

At a table in the corner by the window sit a man and a woman in their 70s, and a woman in her 50s, chatting happily with Scottish accents. A man in his forties leaves, heading past their table out to the car park; he seems to know them. A little while later, they all leave, and the barman is over promptly to tidy away their glasses.

It was quiet before; it’s even more so now.

Above the bar, a sign reads “Alcohol is the answer. Sorry, I can’t remember the question”. At the end of the bar, a chalkboard reads “Wines”; “White rosé wines”; then all five slots below are left empty. Another chalkboard advertises live music; according to my notes (that I’m now reading several days later), it said “Saturday, 13th April” – which is not a thing, at least not in 2017. Maybe they wrote it down wrong, or maybe I wrote it down wrong. (I had beer, and I was taking notes on a phone, so stranger things have happened).

A couple of men in their forties leave; they seem to be regulars, saying goodbye to the barman by name. A man and woman in their thirties arrive, and sit at one of the tables. A man, perhaps in his fifties and wearing a high-vis jacket, arrives and greets the barman by name. He sits at the large table in the corner, where the Scottish group were earlier, reading a red-top paper, eating a packet of crisps, and drinking a glass of white wine.

The music here throws up more surprises: two covers that we don’t recognise – one of ABBA’s Knowing Me Knowing You, and one of A-Ha’s The Sun Always Shines On TV. Then back to the more conventional: Oasis; De La Soul.

I pop into the opposite room, round the right-hand side of the bar, to take a look. At the bar here, all three handles are empty, and the taps offer much the same as round the first part of the bar, plus Eagle Smooth, and something by Strongbow. To one side of the bar, another wine list chalkboard, this one reading “Red wines” – but otherwise, it’s just as blank as the white and rosé list was. Opposite the bar and across the stone-flagged floor, there’s a small raised seating area, and much like the left-hand side of the bar, there’s plenty of light here. There’s a TV, a fruit machine, and a dartboard; and oddly, a set of drums tucked away in a corner.

As we leave, there’s just time for a quick look in the loos, featuring a sign entitled “DRUGS”, warning anyone using or possessing that they’ll be banned and reported; and in the corridor outside the toilets, another sign, featuring an icon of a person in a wheelchair, reading: “If you have any difficulties being served at the bar counter and require assistance, PLEASE speak to a member of staff”. That’s good to see.

And finally, a peek at the deserted beer garden: a large paved affair, with a few picnic benches and plenty of space. At the edge, next to the pub, is what looks like it might be used as a seasonal bar, but with some abandoned paperwork tucked underneath; a broken wine glass lies on the ground, its stem snapped in two. The parasols have been taken away until presumably warmer weather. 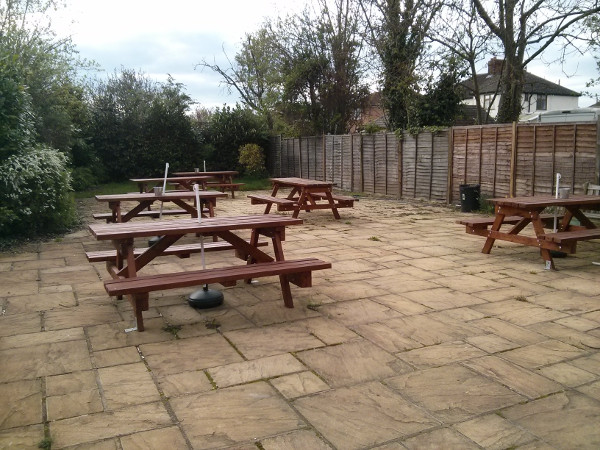 As seems to be a pattern with Charles Wells and Greene King outlets, there’s nothing offensive here, nothing so awful that we can never return; but nothing to draw us back in either. Sure, we could come back in the Summer and see what the beer garden is like. But to be honest, I’m not sure it’s terribly likely to happen.

One thought on “The White Horse”