When we were assembling the list of pubs, a few names cropped up that we’d not heard of before, and The Auction Room was one of them; RealAleRocks and I were interested. We poked our noses in a few weeks ago, late on a weekday evening (I think it might have been on the way home from visiting Three Cups), and on that occasion, it looked like it had too much loud music, and almost no people. So, we thought, let’s try again today.

Only a minute or so’s walk away from the High Street, with its traffic both automotive and pedestrian, and (on Friday and Saturday nights) its security guards at the doors, The Auction Room is tucked away in Duke Street – a place so obscure I always forget it even exists, and have to look up the name of the road to write this blog post. We arrive at 5.30 on a weekday, and we’re the only customers.

Now, I have to confess: with the demise of the Snug Bar and its unwanted transformation back into The Bear, I’ve been missing somewhere to come and have a good cocktail or two, and it looks like The Auction Room might fit the bill. RealAleRocks is sticking to her guns and is going to have an ale, but I’m more easily swayed by other offerings. In terms of beer: no handles, but the taps offer Blue Moon, Sharp’s Cornish Pilsner, Coors, and Guinness; in the fridge there’s Peroni, CW Estrella, Sol, Sharp’s Doom Bar, and Sharp’s Atlantic, as well as a selection of Rekorderlig cider-ish-things. To the side, there’s a large fridge full of wine. RealAleRocks has the Sharp’s Cornish Pilsner (£4.50 a pint), and is pleasantly surprised by it, enjoying its light floral taste; I plump straight for a Blackberry Margarita (£7), and you don’t hear me complaining about my drink either.

The front door has a glass panel dog-leg arrangement, a vestibule of sorts I suppose, and it does a good job of keeping the cool breeze outside, where it belongs. Inside, past the umbrella rack, the room is a wide L-shape, with the bar across the back wall. On top of the rough wooden floorboards, there’s a large slightly scruffy-looking rug, with a few gum patches trodden in. Down the long side wall, there are big comfortable chairs, an another table next to a bench on the wall, and low stools topped with a soft purple fabric. Below a large mirror on the wall is the fireplace, containing a neat little row of candles.

For now, plenty of daylight spills in through the roof, high above. Later on, the artificial light takes over, from a candelabra contained within a series of 4-foot diameter metal hoops; from a row of filament bulbs, suspended above a pair of racks over the bar; from lights behind the bar; from a purple strip light, under the edge of the bar; from uplighters on the walls; and from a colour-changing floor spot lamp, pointed up at the ceiling in the far corner. Candles on the tables add to the soft glow. 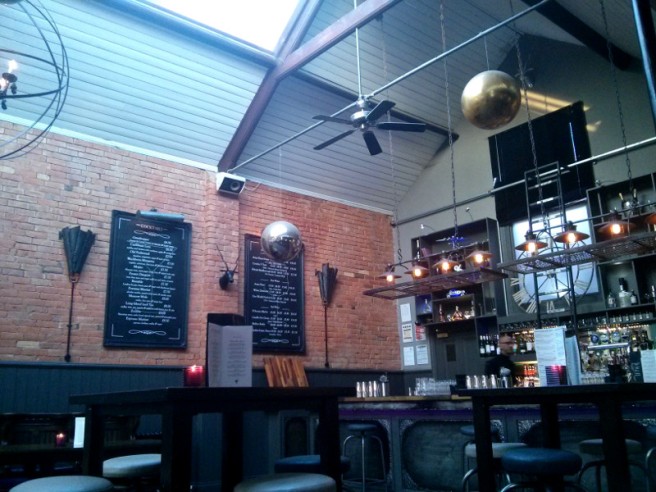 Round to the right, there are high tables and stools, and a series of smaller tables, with wooden and metal chairs, and those more of purple-topped stools again. Given that we’re the only people here, this place can’t help but feel spacious, I suppose. But even ignoring the lack of people, it’s noticeable how much space has been left unfilled here – they could have easily added in two or three more tables, and I’m glad they haven’t.

Katie Melua’s greatest hits plays quietly. After a while, the barman comes over a small complimentary pot of nuts and raisins. He asks if we’d like the music changed; we decline. We’re perfectly happy with what’s on offer – it’s relaxing, and the drinks are good.

Eventually, other people start to appear. A man in his sixties, with a pint of Guinness – but he seems to work here. A woman in her fifties, and another in her thirties, both sat at the bar; a pair of women in their forties, sat in the comfy chairs at the side. The music has now moved on to upbeat jazz.

When we pop downstairs to find the loos, we discover an entire extra basement bar, completely deserted of course. Brick flooring, with leather chairs and sofas. It’d be interesting to come back here when it’s busier, to see it in action.

You know how I previously wrote about being familiar with the list of pubs, in that we realised that The Anchor was missing? Well, I’m afraid we slipped up here: The Auction Room isn’t on the list: we had already decided that it wasn’t a pub, but then we forgot that, and visited anyway.

But you know what? It doesn’t matter. Words and definitions aside, the key concept we’re after is actually “Where could we go for a drink? Where’s good?”. Who cares if it calls itself a pub? Who cares if I (or anyone else) would call it a pub? The bottom line is, if it’s a good place to drink, that’s what counts, and The Auction Room most definitely fits the bill. I’m guessing that we wouldn’t like it if it gets too busy – and we hear that it can get busy on Friday and Saturday nights. But that’s a good thing, because it certainly wouldn’t be able to afford to stay open for long if it was always as quiet as when we were there.

I expect we’ll be back from time to time: it’s a little gem of a place, and as long as you don’t go there for the ale, but instead for the wine and cocktails, you’ll not be disappointed. Hopefully enough other people can find this place, just tucked back away from the High Street, to keep it going. It’d be a shame to lose another cocktail bar.