Sited just next to one of Bedford’s busier road junctions, Flower Pot often looked like it might be a rather unrestful place to enjoy a pint. And again, I’m happy to admit that I was wrong. RealAleRocks and I have been here before, but not for years, because … well no particular reason really. Just, the habit of going to a handful of pubs that didn’t include this one, and that’s one of the reasons we’re doing this series: to re-evaluate and rediscover.

It’s mid-afternoon on a weekday. In the front room, the ceiling is low with dark wooden beams; there’s wooden flooring around the bar, but the front area, near the window, is carpeted – though the carpet looks slightly tired. The music is on low, the solitary fruit machine flashes quietly to itself. Three men sit at the bar, chatting.

On the handles, there’s Doom Bar and London Pride; the taps offer Peroni, and the usual selection of lagers: Carlsberg cold, Kronenbourg, Stella, Fosters. There’s John Smith’s Extra Smooth too, but I’m not sure that counts. In happier news, Thatcher’s Gold is on tap, and in the fridge are two offerings from Sharp’s: Atlantic, and Wolf Rock. RealAleRocks has the Doom Bar; me, the Atlantic. (I forget to note the price. Sorry folks: must try harder).

It’s comfortable here: at this time of the afternoon, the windows to the busy road allow in a fair bit of light, but keep out the worst of the noise. Here in the front, by the window, are a pair of old wooden roughly-rectangular tables. Apart from the bar stools, there’s seating either on the chocolate-coloured soft bench, which has several cushions scattered around, or on some low stools with padded fabric seats. Old photographs of Bedford adorn the walls; on the windowsill, a pair of electric candles in lanterns. Curiously, just next to the window, there’s a single round-pin mains socket: just the one, mind. It’s not obvious to me what that’s doing there. 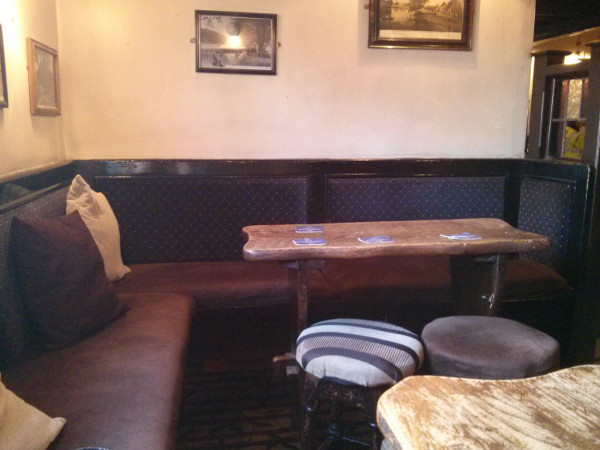 Round to the left, there a several more tables, as the room runs towards the back of the pub. The lighting is dim, and there are lots of old photos of the town here: I find them fascinating. The men who built The Arcade, 1900; old shots of the High Street, and Town Bridge; one of The Olney Arms (which I’d never heard of, but I think seems to have been sited on the junction of Cauldwell Street and St John’s Street, where these days one can find some offices, a few businesses, and the Peking Palace Chinese restaurant. Ah yes! “Scruntlehawk” has more. I’m going to have to go and read all that now, aren’t I?).

(Forgive me, lots of photos in this article: I just love these old pictures on the walls).

The woman who served us, now sits with a man and a young child at one of the tables in the side area, folding bar towels. The men at the bar pop out for a bit; a man in a high-vis outfit plays with the fruit machine.

Following the side room towards the back of the pub, there’s a small anteroom almost, where there’s a TV, some comfy chairs, and a space where it looks like a dartboard is sometimes mounted – as well as a darts scorer, there’s a metal strip, almost flush with the floor, presumably at the regulation throwing distance from where the board would be. (Is it still called an oche, even if it’s not raised? Answers on a postcard).

Further round still, there’s a conservatory area, with plenty of natural daylight; here there’s another TV, a pool table, and a dartboard (an actual one this time, not just space for one), another darts scorer. Trophies line the lintel; on the wall, a poster for the local pool league.

And finally, a window out to the beer garden: a small spot surrounded by high walls, but which are at least somewhat broken up by trees and trellis. I never actually found how to get into the beer garden though. Maybe it’s too off-season.

Probably the only thing that puts me off about this pub is that they seem to be quite into their live music. It was advertised on the sandwich board out the front; a poster in the ladies’ advertised “Music: Jam Night”; and a small ad stuck to the wall in the side room told of a local “heavy rock band” seeking a singer/lyricist (“Ring Jim”). And especially in here, with these fairly low ceilings and small rooms – plenty big enough for drinking, but live music? Well, it would get loud, I think. Maybe go along if that’s your thing.

Failing that, pop along of a weekday afternoon: both our pints went down a treat, and I’d really love to go back and take my time looking at all those old photographs.

One thought on “Flower Pot”